The Industrial Relations scenario in Tamilnadu is very peaceful. the machinery constituted under the Industrial Disputes Act, 1947 is functioning effectively so as to take cognizance of the strikes and lockout situation and act immediately to bring down the situation to normalcy. As such in Tamilnadu at present the conciliation officers are appointed in each district to conciliate the disputes and 12 Labour Courts and one Industrial Tribunal to adjudicate on the disputes referred to them. Apart from this the Special Industrial Tribunals are formed for special areas like Textiles and Plantations whenever necessary.

In the past few decades, the economy has undergone a sea-change brought about by globalization, world-wide market liberalization and the advance and dissemination of information technologies. The impact of globalization has not only revealed the structural weakness inherent in the economies and the fragility of the social fabric but in the process, also accentuated a number of problems faced by those involved in the maintenance of sound industrial relations. The existing system of resolving industrial disputes to get the wheels of the industry go smoothly.

A harmonious understanding between Labour and Management is the first priority of the Labour Department committed to industrial growth and social prosperity. Given this context, the role of this Department becomes extremely crucial and sensitive. The Conciliation Officers are able to do this by combining two fundamental strategies of anticipation and effective conciliation. By and large the role of the Labour Department in the field of industrial relations is one of a welcome facilitator. Through the best efforts, Conciliation officers are able to foster a spirit of bilateralism in various negotiations between Management and Labour on issues like Wages, Bonus, etc. The Department has been strongly advocating for long term settlements, i.e. for three years or five years.

The pragmatic approach of the Government towards industrial relations combining effectively, a need for rapid industrial development of State with its abiding concern for well being of the work force has led to healthy industrial climate in this State. The Conciliation Machinery of the Labour Department is handling and settling a broad spectrum of labour disputes ranging from alleged violation of working hours to serious misconducts. This department plays a vital role in evolving strategies on how best to reconcile economic advancement with proper social protection and industrial harmony. The principal partners in industrial relations are facing critical confronting issues against increasingly diverse practices in trying to adapt to greater competition.

Major strikes are averted and curtailed so that production is not lost and workers have work. Majority of the lock-outs were due to financial problems and not due to labour disputes. This department strives to achieve settlements through conciliation, especially when the employment practices adopted by either some industries collectively or by individual undertakings to meet the challenges thrown by international competition. The officers of the Labour Department achieve this important task through a delicate mechanism of intervention at the appropriate time to conciliate and settle industrial disputes that may upset the balance.

The number of disputes settled by the conciliation officers of this department during the past  years are as follows:- 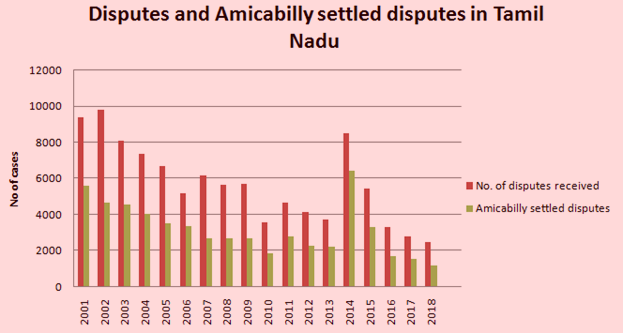